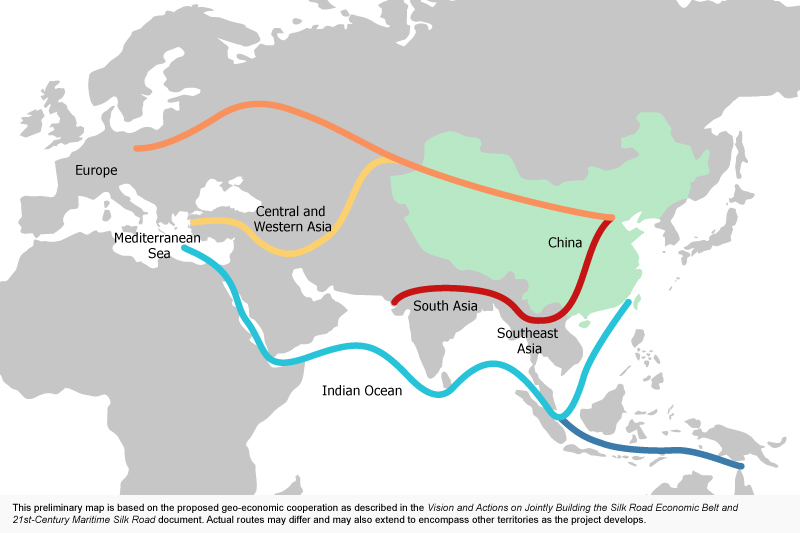 The Belt and Road Initiative refers to the Silk Road Economic Belt and 21st Century Maritime Silk Road, a significant development strategy launched by the Chinese government with the intention of promoting economic co-operation among countries along the proposed Belt and Road routes. The Initiative has been designed to enhance the orderly free flow of economic factors and the efficient allocation of resources. It is also intended to further market integration and create a regional economic co-operation framework of benefit to all.

The National Development and Reform Commission (NDRC) issued its Vision and Actions on Jointly Building the Silk Road Economic Belt and 21st Century Maritime Silk Road on 28 March 2015. This outlined the framework, key areas of co-operation and co-operation mechanisms with regard to the Belt and Road Initiative.

The Belt and Road Initiative aims to connect Asia, Europe and Africa along five routes. The Silk Road Economic Belt focusses on: (1) linking China to Europe through Central Asia and Russia; (2) connecting China with the Middle East through Central Asia; and (3) bringing together China and Southeast Asia, South Asia and the Indian Ocean. The 21st Century Maritime Silk Road, meanwhile, focusses on using Chinese coastal ports to: (4) link China with Europe through the South China Sea and Indian Ocean; and (5) connect China with the South Pacific Ocean through the South China Sea.

Focussing on the above five routes, the Belt and Road will take advantage of international transport routes as well as core cities and key ports to further strengthen collaboration and build six international economic co-operation corridors. These have been identified as the New Eurasia Land Bridge, China-Mongolia-Russia, China-Central Asia-West Asia, China-Indochina Peninsula, China-Pakistan, and Bangladesh-China-India-Myanmar.

The New Eurasia Land Bridge, also known as the Second Eurasia Land Bridge, is an international railway line running from Lianyungang in China’s Jiangsu province through Alashankou in Xinjiang to Rotterdam in Holland. The China section of the line comprises the Lanzhou-Lianyungang Railway and the Lanzhou-Xinjiang Railway and stretches through eastern, central and western China. After exiting Chinese territory, the new land bridge passes through Kazakhstan, Russia, Belarus and Poland, reaching a number of coastal ports in Europe. Capitalising on the New Eurasia Land Bridge, China has opened an international freight rail route linking Chongqing to Duisburg (Germany); a direct freight train running between Wuhan and Mělník and Pardubice (Czech Republic); a freight rail route from Chengdu to Lodz (Poland); and a freight rail route from Zhengzhou to Hamburg (Germany). All these new rail routes offer rail-to-rail freight transport, as well as the convenience of “one declaration, one inspection, one cargo release” for any cargo transported.

Linked by land, China, Mongolia and Russia have long established various economic ties and co-operation by way of frontier trade and cross-border co-operation. In September 2014, when the three country’s heads of state met for the first time at the Shanghai Co-operation Organisation (SCO) Dushanbe Summit, agreement was reached on forging tripartite co-operation on the basis of China-Russia, China-Mongolia and Russia-Mongolia bilateral ties. At the same meeting, the principles, directions and key areas of trilateral co-operation were defined. The three heads of state also agreed to bring together the building of China’s Silk Road Economic Belt, the renovation of Russia’s Eurasia Land Bridge and the proposed development of Mongolia’s Steppe Road. This commitment will strengthen rail and highway connectivity and construction, advance customs clearance and transport facilitation, promote cross-national co-operation in transportation, and help establish the China-Russia-Mongolia Economic Corridor. In July 2015, the three leaders held a second meeting in the Russian city of Ufa. This second summit saw the official adoption of the Mid-term Roadmap for Development of Trilateral Co-operation between China, Russia and Mongolia.

The China-Central Asia-West Asia Economic Corridor runs from Xinjiang in China and exits the country via Alashankou to join the railway networks of Central Asia and West Asia before reaching the Mediterranean coast and the Arabian Peninsula. The corridor mainly covers five countries in Central Asia (Kazakhstan, Kyrgyzstan, Tajikistan, Uzbekistan and Turkmenistan) as well as Iran and Turkey in West Asia.

During the Fifth Leaders Meeting on Greater Mekong Sub-regional Economic Co-operation, held in Bangkok in December 2014, Chinese Premier Li Keqiang put forward three suggestions with regard to deepening the relations between China and the five countries in the Indochina Peninsula. The suggestions included: (1) jointly planning and building an extensive transportation network, as well as number of industrial co-operation projects; (2) creating a new mode of co-operation for fundraising; and (3) promoting sustainable and co-ordinated socio-economic development. Currently, the countries along the Greater Mekong River are engaged in building nine cross-national highways, connecting east and west and linking north to south. A number of these construction projects have already been completed. Guangxi, for example, has already finished work on an expressway leading to the Friendship Gate and the port of Dongxing at the China-Vietnam border. The province has also opened an international rail line, running from Nanning to Hanoi, as well as introducing air routes to several major Southeast Asian cities.

The concept of the China-Pakistan Economic Corridor was first raised by Premier Li Keqiang during his visit to Pakistan in May 2013. At the time, the objective was to build an economic corridor running from Kashgar, Xinjiang, in the north, to Pakistan’s Gwadar Port in the south. At present, the two governments have mapped out a provisional long-term plan for building highways, railways, oil and natural gas pipelines and optic fibre networks stretching from Kashgar to Gwadar Port. According to a joint declaration issued by China and Pakistan in Islamabad in April 2015, the two countries will proactively advance key co-operation projects, including phase II of the upgrade and renovation of the Karakoram Highway (the Thakot-Havelian section), an expressway at the east bay of Gwadar Port, a new international airport, an expressway from Karachi to Lahore (the Multan-Sukkur section), the Lahore rail transport orange line, the Haier-Ruba economic zone, and the China-Pakistan cross-national optic fibre network.

In a series of meetings during Premier Li Keqiang’s visit to India in May 2013, China and India jointly proposed the building of the Bangladesh-China-India-Myanmar Economic Corridor. In December 2013, the Bangladesh-China-India-Myanmar Economic Corridor Joint Working Group convened its first meeting in Kunming. Official representatives from the four countries conducted in-depth discussions with regard to the development prospects, priority areas of co-operation and co-operation mechanisms for the economic corridor. They also reached extensive consensus on co-operation in such areas as transportation infrastructure, investment and commercial circulation, and people-to-people connectivity. The four parties signed meeting minutes and agreed the Bangladesh-China-India-Myanmar Economic Corridor joint study programme, establishing a mechanism for promoting co-operation among the four governments.

In terms of specifics, policy co-ordination means that countries along the belt and road will, via consultation on an equal footing, jointly formulate development plans and measures for advancing cross-national or regional co-operation; resolve problems arising from co-operation through consultation; and jointly provide policy support to practical co-operation and large-scale project implementation.

Facilities connectivity refers to prioritising areas of construction as part of the Belt and Road strategy. Efforts will be made to give priority to removing barriers in the missing sections and bottleneck areas of core international transportation passages, advancing the construction of port infrastructure facilities, and clearing land-water intermodal transport passages. The connectivity of infrastructure facilities, including railways, highways, air routes, telecommunications, oil and natural gas pipelines and ports, will also be promoted. This will form part of a move to establish an infrastructure network connecting various Asian sub-regions with other parts of Asia, Europe and Africa.

In order to facilitate unimpeded trade, steps will be taken to resolve investment and trade facilitation issues, reduce investment and trade barriers, lower trade and investment costs, as well as to promote regional economic integration. Efforts will also be made to broaden the scope of trade, propel trade development through investment, and strengthen co-operation in the industry chain with all related countries.

In terms of people-to-people bonds, efforts will be made to promote exchanges and dialogues between different cultures, strengthen friendly interactions between the people of various countries, and heighten mutual understanding and traditional friendships. This will all form the basis for the advancement of regional co-operation.

The Belt and Road Initiative upholds the principles of jointly developing the programme through consultation with all interested parties. Existing bilateral and multilateral co-operation mechanisms will be utilised to promote the integration of the development strategies of the countries along the route. Steps will be taken to advance the signing of co-operation memorandums of understanding or co-operation plans for the establishment of a number of bilateral co-operation demonstration projects. Efforts will also be made to set up a sound bilateral joint work mechanism, and to devise an implementation plan and action roadmap for advancing the Belt and Road strategy.

The US$40 billion Silk Road Fund has been established to finance the Belt and Road Initiative. It will invest mainly in infrastructure and resources, as well as in industrial and financial cooperation. The Fund was set up as a limited liability company in December 2014 with its founding shareholders including China’s State Administration of Foreign Exchange, the China Investment Corp, the Export-Import Bank of China and the China Development Bank. The Fund will comply with market rules and the international order of finance, and welcome participation from domestic and overseas investors, such as the China-Africa Development Fund and the Asian Infrastructure Investment Bank.

The AIIB, a new multilateral development bank (MDB), has been set up with a view to complementing and cooperating with the existing MDBs in order to address infrastructure needs in Asia. AIIB will focus on the development of infrastructure and other productive sectors in Asia, including energy and power, transportation and telecommunications, rural infrastructure and agriculture development, water supply and sanitation, environmental protection, urban development and logistics.

The AIIB Articles of Agreement entered into force on 25 December 2015. On 16 January 2016, the Board of Governors held its inaugural meeting, declaring the Bank open for business and electing Mr. Jin Liqun as President for an initial five-year term.

How and when to purchase tickets to https://pro-academic-writers.com a theatre.